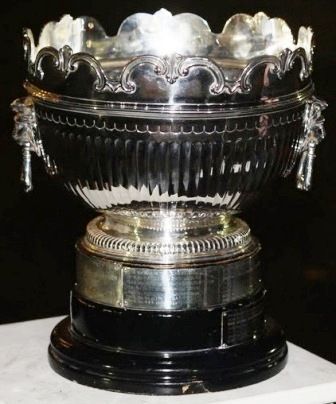 Dulwich Air Cadets are the best! 1475 (Dulwich) Squadron of the Air Training Corps (ATC), to give its full title; the air cadet unit, based in at the Cadet Centre in Lordship Lane, South East London, won the Sir Alan Lees Trophy making it the best squadron in the country. Air Marshal Sir Alan Lees, a senior RAF WW2 officer, presented the trophy to the ATC in 1949 to be awarded annually to the squadron judged by the organisation's head, Commandant Air Cadets, currently Air Commodore Barbara Cooper CBE RAF, to be the top unit.

In deciding the winner, Air Commodore Cooper and her staff from HQ Air Cadets based at RAF Cranwell in Lincolnshire had to judge the Squadron on its effectiveness in delivering the ATC’s national syllabus of training, and its achievements in gaining awards for its cadets (such as Duke of Edinburgh's Award, First Aid, Flying and Gliding Scholarships), sporting achievements, contribution to the local community, adventurous training activity and academic training in aviation subjects which all lead to nationally recognised BTEC awards equivalent to four GCSE passes. Dulwich Squadron was judged to be the best in all those areas out of 930 units in the Country. 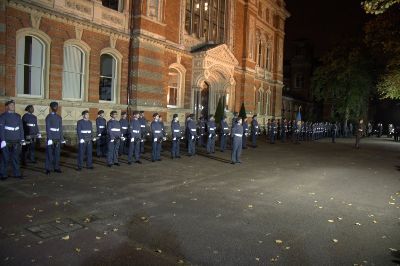 On a brilliantly flood lit evening at Dulwich College last Friday evening, the Squadron was paraded to receive the award from a local boy from Sydenham, but now one of the RAF’s most senior officers, Air Marshal Chris Harper CBE, the Deputy Commander of the NATO Joint Force Command based in Brunssum, Holland, who also happens to be 1475 Squadron’s Hon President. The principal guest Air Commodore Cooper and the Guest of Honour was the Worshipful Mayor of Southwark, Cllr Tayo Situ. 350 parents and invited guests witnessed Air Marshal Harper formally receive the Lees Trophy on behalf of the Squadron from Air Cmdre Cooper. The Air Marshal then presented the Trophy to the head-boy of the Squadron, Cadet Warrant Officer Jake Hay (19), who also commanded the parade. The clearly delighted 87 cadets on parade erupted with cheering and shouts of joy and singing the Squadron song “strive to win.” The jubilations subsided after a short firework display and the parade continued with a presentations of full Squadron Colours to Cadet Flight Sergeant Mohassin Shah (19), Capt of Rugby, and promotions to Cadet Flight Sergeant for Sheri Olagunju (17), Zeena Shah (16), Edmundo Espin-Salazer (16), and the Cadet Forces Medal to Flight Lieutenant Matthew Impey RAFVR(T), the Squadron Adjutant.
At the reception following the parade, the Air Marshal also presented nine cadets with their Gliding Wings all of whom had just that day completed a week’s course at the air cadets’ central gliding school. To qualify for their wings, the cadets had to fly solo. 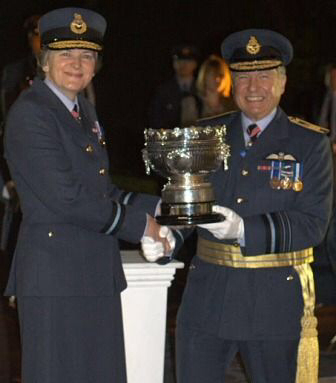 The Squadron's commanding officer, Squadron Leader Kevin Mehmet RAFVR(T) remarked that “2010 also happens to be the UK cadet movement's 150th anniversary and to be judged the best air cadet squadron in this very special year makes winning the Lees Trophy all the more outstanding. We are all delighted and thrilled to be recognised in this way.”
Competition to be the best is tough as winners usually do it after one or two attempts. 1475 Squadron's victory is all the more remarkable as they achieved it at the first attempt. “We always knew we were the best, and now it is official, but I would say that wouldn't I,” said Cadet Flight Sergeant Esteban Albuja (17), one of the senior boys on the Squadron.

During the final inspection on 23rd June 2010 by Air Commodore Cooper, the Squadron gave the commandant a snap shot of its training activity. Air Commodore Cooper saw how band practice was conducted, shooting skills taught, leadership training delivered to the senior members of the unit, how recruits were trained and sports organised. Air Commodore Cooper also formally inspected the Squadron on parade where 119 cadets, commanded by Cadet Warrant Officer Jake Hay (19), Head-Boy, were formed up to receive her. With 120 plus cadets, 1475 Squadron is one of the largest units in the country.“This really is an outstanding achievement and I am extremely proud of the cadets who brought the Lees Trophy to Dulwich. It is a testimony to their hard work and commitment to serve their community. However, none of this could be possible without the dedication of the adult unpaid volunteer staff who give up their time to lead, train, and develop the young men and women cadet members in life skills so that they may become better and responsible citizens in society. I am very grateful to the staff of the Squadron, especially the deputy squadron commander, Flight Lieutenant Matthew Impey, for their invaluable contribution in winning the Lees Trophy,” said Squadron Leader Mehmet. 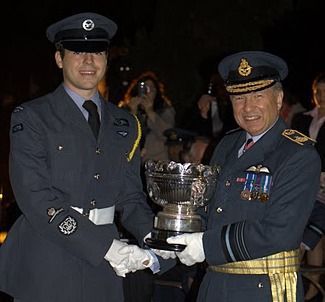