We are Dulwich's own Air Cadet unit 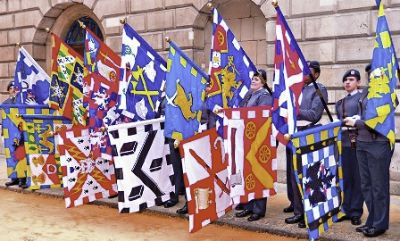 Cadets of the Squadron on duty as the Heraldic Banner Bearers to the Lord Mayor Sheriffs and Aldermen of the City of London.

The unit was formed on the 12th June 1941 as 1475 (3rd Lewisham) Squadron of the Air Training Corps under a Royal Warrant signed by His late Majesty King George VI dated 5th February 1941. The Squadron is one of over 1000 in the Air Training Corps (with a membership of 60,000 cadets, aged 12 to 20 years, and volunteer staff). The ATC is a national youth organisation funded by the Royal Air Force (RAF) to provide young people with training which will be useful in adult life, to foster an interest in the Royal Air Force and aviation. The "squadron" is the basic operating unit of the Corps with very close ties to its local community. It was those local ties that led to 1475 Squadron changing its title to reflect its present location when it moved to Dulwich after the war.

1475 Squadron has enjoyed a very successful existence. Its current strength is 100+ members. Its particular strength is in sport, having dominated the athletics, swimming, cross country, and orienteering competitions in the London area since the 1960s. The Squadron is affiliated to the Worshipful Company of Haberdashers and it holds the appointment of Heraldic Banner Bearers to the Lord Mayor, Sheriffs and senior Aldermen of the City of London. 1475 Squadron also holds two Air Training Corps Certificates of Merit (the highest meritorious award made to a Squadron) for services to the City of London and the Royal Air Force Benevolent Fund respectively.

The Squadron's aim is to develop in its cadets, through the concept of formal military discipline, a sense of responsibility, confidence, loyalty, determination and motivation, by teaching and providing cadets with skills in areas of communication, leadership, planning, and team working through a host of practical initiatives centred on competition in as many areas of Squadron training activity as possible; mainly sport and adventure training.

The Squadron's commitment to competition is in keeping with its spirit and character justly summed up in its motto; Certamus Vincere (pronounced kert-a-mus win-ker-e) Latin for "Strive to Win". Competition provides the medium for developing and learning all the above qualities and skills in the cadet.