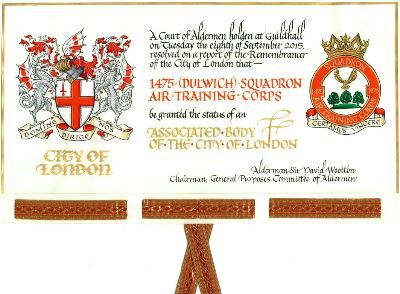 CITY OF LONDON CIVIC HONOUR BESTOWED TO MAKE
1475 (DULWICH) SQUADRON ATC
AN ASSOCIATED BODY OF THE CITY OF LONDON
The City of London bestowed on No 1475 (Dulwich) Squadron ATC the Civic Honour of an Associated Body of the City of London. This honour is unique for a cadet unit To put it in to context these are the units granted Civic Honours of by the City of London:-
The Princess of Wales's Royal Regiment (deriving from Holland's Regiment of Foot, later the Buffs; recognised since at least 1746).
The Royal Marines (apparently deriving, indirectly, from the Duke of York's Maritime Regiment; recognised at least since 1904).
The Grenadier Guards (deriving from Russell's Regiment of Foot; recognised in the 3rd Battalion at least since 1904, extended to the whole Regiment in 1915 by the General Purposes Committee of Aldermen).
The Royal Regiment of Fusiliers (deriving, in one Battalion, from the London Militia; long recognised in the Militia, and extended to the whole Regiment in 1924 by the Privileges Committee of Aldermen).
The Honourable Artillery Company (granted by the Privileges Committee of Aldermen in 1924).
The Coldstream Guards (originally from the Duke of Albemarle's Regiment; recognised by the Court of Aldermen in 1952).
The Blues & Royals (deriving from the Royal Dragoons; recognised by the Court of Aldermen in 1961).
The London Regiment (granted by the Court of Aldermen in 1995).600 (City of London) Squadron Royal Auxiliary Air Force (granted by the Court of Aldermen in 2007).
The Rifles have some significant formal association with the City (continuing, in much-diluted fashion, the lineage of the London Rifle Brigade, formed at Guildhall in 1859 with the encouragement of the civic authorities; the Regiment has a plaque in Guildhall, and is said to provide a guard at the Lord Mayor's Banquet).
101 (City of London) Engineer Regiment (EOD).
The above units hold a special status or honour in the City of London. This is the City's Civic Honour of Adoption, most commonly referred to by local Boroughs as "Freedoms." The City works differently. The above units, as can be counted amongst the elite of our armed forces and rightly so. It can be noted that there are no cadet units there; indeed not even regular RAF Squadrons. Also in the last 50 or so years, this honour has only been granted twice. The Court of Aldermen of the City on 8th September 2015 unanimously granted that distinction to No 1475 (Dulwich) Squadron ATC as an "Associated Body of the City of London." One needs to think about this for a moment to fully appreciate what a great and unique honour this is for 1475 Squadron, the whole of the ATC, ACO and the RAF. This ancient honour sees us join an elite few and underlines 1475 Squadron's close connection with the City of London particularly pertinent in our 75th year. The Squadron's service to the City, the financial capital of the world, is being formally recognised. We have performed our duty as the Heraldic Banner Bearers to the Lord Mayor, Sheriffs and senior Aldermen of the City of London consistently and exemplarily for the past 25 years. We hold the Lord Mayor's Banner and can now carry it freely, with bayonets fixed and bands playing as a right bestowed upon us by the City of London. I am extremely proud that this honour is being conferred on the Squadron.
KEVIN MEHMET MBE RAFVR(T)
Squadron Leader
Commanding Officer
1475 (Dulwich) Squadron ATC
(City of London's Own)