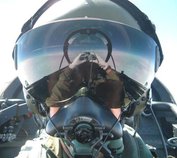 What makes the Air Cadets different from all other Youth Organisations is the opportunities that you will get to fly and glide!  You could fly solo in an Air Cadet glider before you are even legally allowed to drive!

As an Air Cadet you will have the opportunity to fly in one of the Organisation's Grob Tutor aircraft at least once a year.  Most cadet flying is carried out when attending one of the many Air Experience Flights (AEF) based at Royal Air Force (RAF) stations around the UK.

1475 Cadets will usually fly with 6 AEF based at RAF Benson in Oxfordshire.

But the flying doesn't stop there!  You could also find yourself taking a flight in the back of an RAF helicopter or even the backseat of an RAF fast jet!

Air Cadets learn to glide right up to solo standard!

Cadets learn the basics of gliding during a Gliding Induction Courses (GIC) and once aged over 16 you will be eligible to apply for a Gliding Scholarship (GS) where at the end of a week long (or series of weekends) training course you could go solo!

You could then undergo more Advanced Glider Training (AGT) and even reach the standard where you are teaching other cadets to glide, while still a cadet yourself!

1475 cadets will usually learn to glide in one of the Air Cadet's Grob Viking's with 615 Volunteer Gliding School (VGS) based at Kenley Airfield, a former WW2 RAF Base.

Get social with us.